A TEAM  of scientists has cut the growing time of wheat by 50 per cent by using LED lighting.

It’s the latest breakthrough in the LED revolution sweeping the horticultural industry.

Researchers from Australia and the UK grew wheat from seed to maturity in just eight weeks instead of the standard 16 week growing time for the cereal grown in spring.

The ‘speed-breeding’ regime developed by teams at the John Innes Centre in Norwich, UK, in conjunction with the universities of Queensland and Sydney, uses a glasshouse with LEDs ‘tuned’ to aid photosynthesis in wheat and illuminated for up to 22 hours a day.

The development means that, for the first time, it is possible to grow as many as six generations of wheat every year, a threefold increase on the shuttle-breeding techniques currently used by breeders and researchers. The success of the project is being compared to the post-World War Two ‘shuttle-breeding’ innovations in cereal production.

‘Globally, we face a huge challenge in breeding higher yielding and more resilient crops,’ the leader of the team, Dr Brande Wulff of the John Innes Centre, told Lux. ‘Being able to cycle through more generations in less time, will allow us to more rapidly create and test genetic combinations and find the best combinations for different environments.’

Despite a rapidly growing world population and the impact of climate clange, the improvement rates of several staple crops have stalled in recent years. 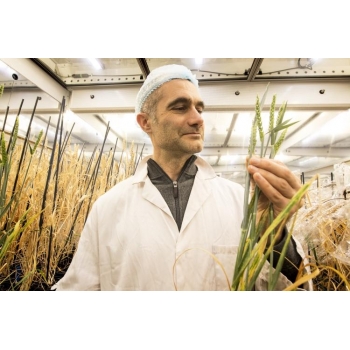