In 2017, the Lighting Research Center (LRC) at Rensselaer Polytechnic Institute published a study showing that office workers who receive a robust dose of circadian-effective light experience better sleep, and lower levels of depression and stress, than those who spend their days in dim or low light levels.

The team of LRC researchers, led by Dr. Mariana Figueiro and sponsored by the U.S. General Services Administration, measured existing light levels for 109 participants at five federal office buildings designed to maximize daylight availability indoors. The research team found that even in open offices with many, large windows, office workers were not receiving enough light to stimulate their circadian system during the day, due to factors such as season, cloud cover, desk orientation, and window shade position.

In response to these findings, the LRC team theorized that supplemental electric lighting could be used to ensure that office workers receive enough light during the day—and put their theory to the test in this new study, installing circadian-effective lighting for 68 participants at two additional U.S. federal government office sites and two U.S. embassies, and evaluating whether the lighting intervention would reduce sleepiness and increase alertness, vitality, and energy. 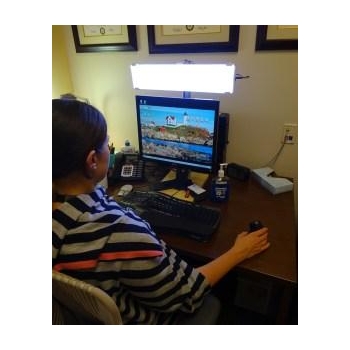