Dilapidated warehouses and factories are being transformed into urban farms to grow salads and other leafy greens at a rate that surpasses traditional farming techniques. At one vertical farm in Japan, lettuce can be harvested within 40 days of seed being sown. And within two towers measuring 900 m2 each (actual cultivation area of 10 800 m2 and 14 400 m2), the factory can produce 21 000 heads of lettuce each day.

Indoor farming is not a new concept, as greenhouses have long demonstrated. It has existed since Roman times and can be found in various parts of the world. Greenhouses are described in a historic Korean text on husbandry dating from the 15th century and were popular in Europe during the 17th century. In modern times they have enabled the Netherlands to become the world’s second largest food exporter.

Vertical farming offers a new take on indoor farming. Popularized by the academic Dickson Despommier, its proponents believe that vertical farming can feed millions of people while reducing some of the negative aspects associated with current agricultural practices: carbon-emitting transportation, deforestation and an over-reliance on chemical fertilizers.

Vertical farming is defined as the production of food in vertically stacked layers within a building, such as a skyscraper or warehouse in a city, without using any natural light or soil. Produce is grown in a controlled environment where elements including light, humidity, and temperature are carefully monitored. The result provides urban dwellers with year-round access to fresh vegetables since they can be grown regardless of weather conditions, without the need for pesticides and have only a short distance to cover, from farm to plate. 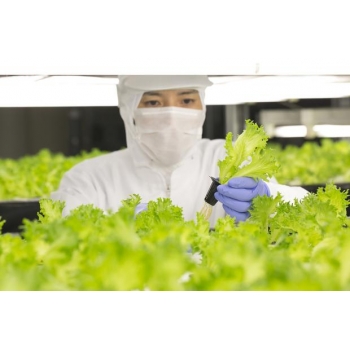