The DOE has published color metric research that compares the Illuminating Engineering Society (IES) TM-30 Rf color fidelity metric with the International Commission on Illumination (CIE) CRI Ra metric and with the newly emerged CIE Rf metric. Members of the CIE have long acknowledged shortcomings with CRI for LED sources, especially in accurately characterizing how a source renders saturated colors such as deep reds, but the CIE has at the same time opposed alternatives such as TM-30. The new DOE work documents TM-30 as more accurate with many sources and also finds near alignment between IES Rf and CIE Rf.

Interested in articles & announcements on Department of Energy reports?

We at LEDs Magazine have long advocated that the industry should move to the TM-30 two-metric standard that includes separate fidelity and gamut (Rg) elements. But opponents have argued that IES Rf and CIE Ra return similar scores for commercially-available LED sources, making a move to TM-30 unjustified.

The new DOE research was authored by Michael Royer of the DOE’s Pacific Northwest National Laboratory (PNNL) and was initially published in LEUKOS — the journal of the IES. Subsequently, the DOE also published a reproduction of the entire work on its SSL website. 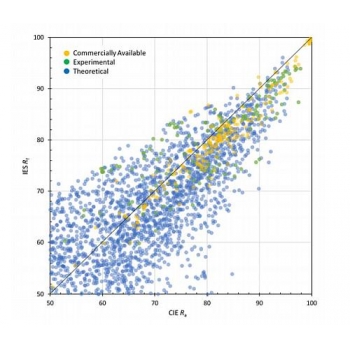