Researchers from New York University (NYU) Tandon School of Engineering have created a new type of composite film capable of blocking electromagnetic interference (EMI). The new technique is both low-cost and extremely effective. Electromagnetic interference can have disastrous effects on a host of devices, including smartphones, drones, aircraft, and medical devices. Scientists have been looking for new, improved ways to protect people and technology — and this film is the latest innovation.

To construct this high-tech composite film, scientists used spin-spray layer-by-layer processing. This involves placing spray heads above a spin coaster. The heads rain down sequential, nanometer-thick monolayers of oppositely-charged compounds. The end result is a high-quality film that can be attached to any component. This method has the added benefit of being far more time-efficient than previous methods for making film.

This technology means that scientists can quickly and effectively make film that is flexible, semi-transparent, and most of all EMI-shielding. The film is made up of hundreds of alternating layers of carbon nanotube, polyelectrolytes, and an oppositely charged titanium carbide known as MXene. MXene is an important addition to the system, as it can adhere to any surface, making it extremely versatile. It’s also conductive — which helps enormously in the fight against EMI. 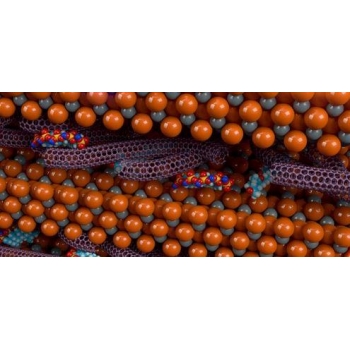