Architectural Lighting: OLEDs in the Spotlight

LEDs and OLEDs are often grouped together in industry discussions, but while the former has taken ahold of—and transformed—the lighting sector, the latter has followed a more gradual trajectory of development and adoption. Performance, life span, and cost have set the two lighting sources apart, but recent advances in OLED panel technology accompanied by successful field-testing have narrowed the gap.

The Basics
OLEDs, or organic light-emitting diodes, share a portion of their name with LEDs but that is where the similarities end. LEDs use two electrodes—a cathode and an anode—to produce and emit light and can be configured in linear or circular arrays as a component directly within the luminaire assembly. OLEDs sandwich organic compounds between the cathode and anode, which are then applied to a substrate that typically is rigid, such as glass. In recent years, OLED manufacturers have explored other substrates such as plastic, which enable flexible and curved OLED panels, as well as larger panel sizes and shapes beyond the conventional 2-inch-square or 4-inch-square format.

Perhaps the most important distinction between LEDs and OLEDs is the type of light they produce. LEDs are direct point sources that offer tight and focused beam control. OLEDs, in contrast, are a thin, planar, diffuse, and glare-free source, and are well suited for ambient lighting or backlighting applications such as signage. 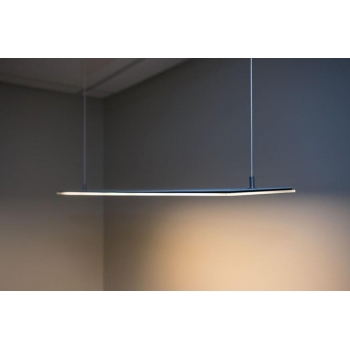