A team of engineers from the University of California, San Diego have developed a material consisting of stretchable fuel cells that can successfully convert energy from sweat into power for electronics such as LEDs and Bluetooth radios. To create biofuel cells that were flexible enough to be worn, the team developed a “bridge and island” structure of positively and negatively charged electrodes (called cathodes and anodes) using lithography and gold. To increase the amount of energy the material could store, the engineers then printed a 3D nanotube structure on top of the electrodes. Eventually the team connected the biofuel cells—with an applied enzyme that oxidizes the lactic acid in sweat to generate a current—with a custom circuit-board converter that provides a standard voltage.

"Researchers equipped four subjects with the biofuel cell-board combination and had them exercise on a stationary bike," according to a press release. "The subjects were able to power a blue LED for about four minutes."

Though the researchers found the materials used to be light-sensitive and degrade over time, with a more stable material the team is optimistic for future applications in wearable electronics. 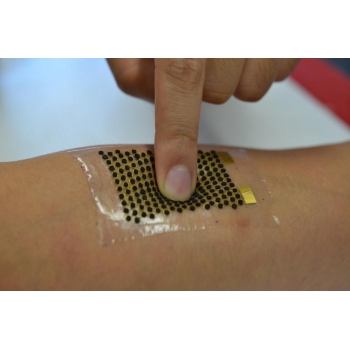