Improving The Efficiency of LED Lightbulbs by Mimicking Fireflies

Scientists from Penn State University have created a new type of light-emitting diode (LED) lightbulb that could change the way we light our homes. The design of the new LEDs mimics the structures used by fireflies in nature, and could improve efficiency while reducing the cost of keeping the lights going brightly.

Scientists got the idea when they realized that fireflies face the same issue as LEDs; they often have difficulty releasing the light they create, since light has the ability to reflect backwards. When this happens, the light created is lost. LED lights have dealt with the conundrum by texturing the surface with microscopic projections, known as microstructures. These allow more light to escape from the structure, producing a brighter and more consistent light.

This is similar to how a fireflies’ lantern operates, with one crucial difference. While the microstructures on LED lights are perfectly symmetrical, the ones on firefly lanterns are not. In fact, the slants are so dramatic that they can end up looking distinctly uneven and off-center. 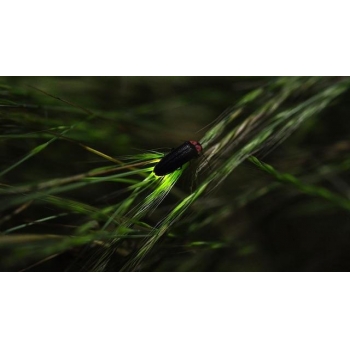