"LED lightbulbs play a key role in clean energy," said Stuart (Shizhuo) Yin, professor of electrical engineering. "Overall commercial LED efficiency is currently only about 50 percent. One of the major concerns is how to improve the so-called light extraction efficiency of the LEDs. Our research focuses on how to get light out of the LED."

Fireflies and LEDs face similar challenges in releasing the light that they produce because the light can reflect backwards and is lost. One solution for LEDs is to texture the surface with microstructures — microscopic projections — that allow more light to escape. In most LEDs these projections are symmetrical, with identical slopes on each side.

Fireflies' lanterns also have these microstructures, but the researchers noticed that the microstructures on firefly lanterns were asymmetric — the sides slanted at different angles, giving a lopsided appearance.

"Later I noticed not only do fireflies have these asymmetric microstructures on their lanterns, but a kind of glowing cockroach was also reported to have similar structures on their glowing spots," said Chang-Jiang Chen, doctoral student in electrical engineering and lead author in the study. "This is where I tried to go a little deeper into the study of light extraction efficiency using asymmetric structures."

Using asymmetrical pyramids to create microstructured surfaces, the team found that they could improve light extraction efficiency to around 90 percent. The findings were recently published online in Optik and will appear in the April print edition. 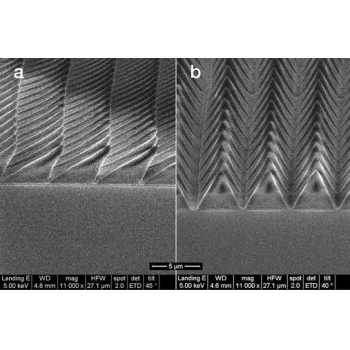